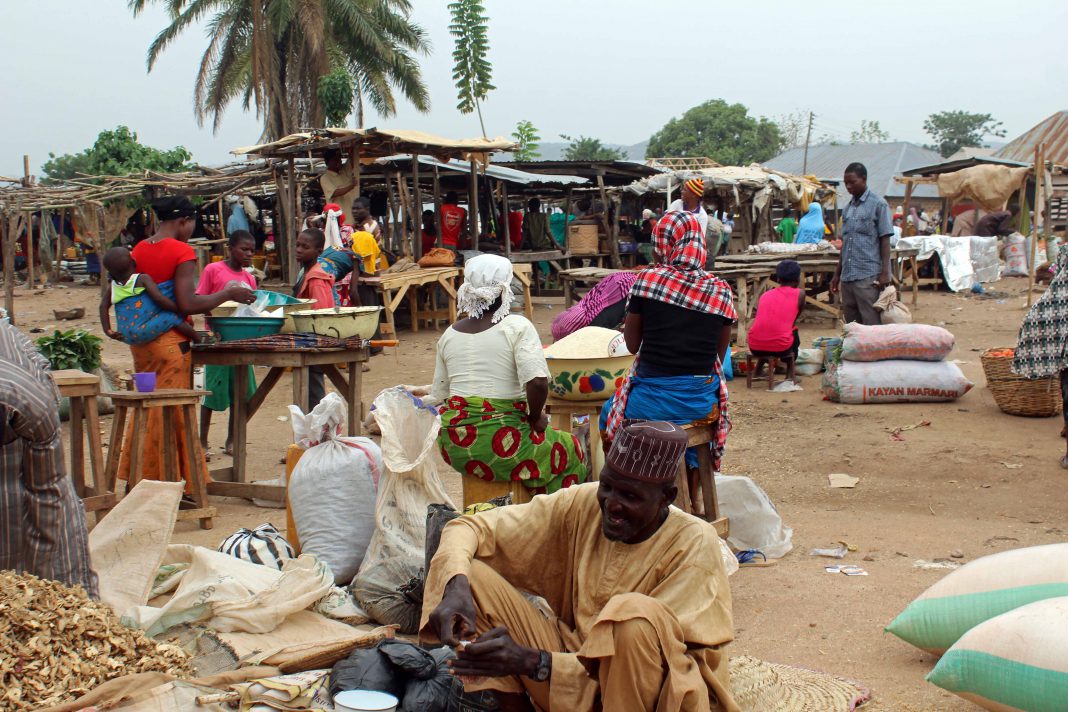 The word Eggon means “gifted sensitivity”. Research shows that before the advent of the colonialist, a rundown on the migration of the people of Eggon shows that; they were inhabitants of Ngazargamu, now known as Borno State. They migrated and joined the Kwararafa kingdom, after the dissipation of the kingdom they crossed the Benue River at Ibi. In their journey’s they made several stops in various settlements (this is the predominant reason for their dispersed distribution within the mid-belt of Nigeria), they finally arrived at Eggon hill of Nasarawa State and were known to be settlers on a hill top before coming down to the grasslands towards urbanization.

In history, the people of Eggon where governed by traditional religious laws by a caretaker Chief Priest Adanashim. With strong adherence to their beliefs, they have kept the statutes of old and regarded the position of a ruling clan in each settlement called Tsagbeju. Today they have restructured their ruling patterns and the first class chieftain title is called the Aren Eggon (Father/Chief of Eggon). This chieftain title is open to all indisputable Eggon men; basically from the three (3) major clans of the Eggon people Anzo, Eholo, and Eggon Ero. Twelve (12) kingmakers are selected from the clans who serve as scrutiny for the selection of the first class chief. 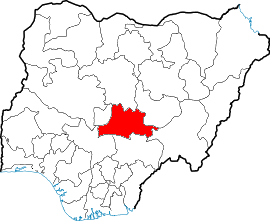 The people of Eggon are inhabits Nasarawa State in the mid-belt of Nigeria. Predominantly located in Lafia, few more at Akwanga, Keffi, and Eggon local government areas of Nasarawa. They are also found in little settlements like Kokona, Doma, Obi, Keana and Wamba. The general population of the Eggon people using current statistical analysis ranges from approximately 237,000 inhabitants, with 20% as Christians, 65% still practicing ethnic religion passed on from generations, and 15% practicing Islam. The three (3) clans previously discussed have their settlements located in several villages namely: The Anzo Clan –Alogani, Angbaku Ezeng, Gale, Gunyi, Okgba, Ogbagi, Ugba Waama and Wogna; The Eloho Clan – Alushi, Endeho, Ginda, Gaji, Ika, Lizin KeffiUngwashuru, Wana, Wangibi, Warizo, Wulko and Wuwen; the Eggon Ero Clan are found in Alizaga, Bakyono, Arigbadu Sako and Ume. These clans have differentiated tribal marks; the Anzo and Eloho clan carries fifteen long mark on the face (from temple to cheek), while the Ero clan share similar marks but differentiated with nine stripes. Modernization has gradually made the facial marks extinct and can only be seen on the aged folks.

An exclusive interview of Clans head in Aku village Nassarawa state, Chief Baba Aku, describes the Eggon people as the first settlers in Nassarawa.  With the advent of the colonialists in the Nasarawa province, they saw the need to establish district and local authority headquarters in each of the provinces; this development further gave rise to the beginning of the urbanization that currently exist in Nasarawa State. The construction of the 1976 local government reforms also gave rise to the structure of Nasarawa state that makes Lafia, Keffi and Akwanga as major urbanized settlements. According to Chief Baba Aku, the mode of life style of the Nasarawa people have been passed on from generation to generation such as; mode of exchanging pleasantries – “Agba” (I welcome you).. “Mi-o-ma-gu” (Are you in Peace?)

Their mediums of reverence vary depending on individual preference; in forms of sticks, cowries, beads, selected stones and clay pots. Example objects like the Ashim (represents the supernatural as it rids off all forms of evil from the possessor; it is also known to extract truth from liars and thieves), other popular supernatural deities include; Akuk, Arikya, Gango and Yamba and used by various families depending on the needs for survival, childbirth, bountiful yield, protection etc. Their traditional religion believes that all men and women who die transcends to the spirit world, and can only see Angbashim, not the god head, Ahogben. Thus, to attract bountiful yield before planting seasons, the people offer sacrifices to the god head through Angbashim. From January to April sacrifices of animals are made to the gods to ensure rainfall for the cultivation season, and a renewal of sacrifices to appease the gods in September.

Just like other cultures, festivity is an integral part of the Eggon way.  Annually, the people of Eggon come from various locations all over the world to feast and show love to one another. The chief priest releases the “dodo” masquerade on this day as all the young maidens and men come out in colossal numbers; making beautiful traditional renditions to their gods. The men and maidens dress in traditional regalia, the men also display armories (knives, spears, shield made out of wild ox skin, bow and arrow) used in the past to fight the local wars. 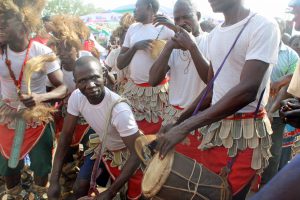 Modern trends have changed the modes of marriage rites within the Eggon people. Traditionally, during child birth, the midwife who is already familiar with the family chooses betrothed male or female from her clan depending on the sex of the child being born. If the sex is a girl, a special dry wood would be given to the mother to boil water and bath the child as a sign of interest in betrothing the girl. After consent, the “gamba” leaf would be assembled by the suitors and foodstuff on agreement of the girl’s parents. This food stuff gifts would be presented each year until the girl is ready and of due age for marriage as stipulated by her parents. On the period of her wedding the friends (25) of the young man must cultivate a farm land of the bride and her parents. Due to the nature of the predominant occupation of the Eggon people (agriculture), they are polygamous in nature, their wives and children help in tilling and cultivating the soil for a massive yield of farm produce.

The Burial rites for the Eggon people is unified and have been passed on through generations.  In the case of demise of an Eggon individual, the corpse is treated with due respect. The corpse is cleaned up and dressed up awaiting the rites of the chief priest or prominent clan’s men. The Makpngibi men digs the grave; dug up to four feet like a round tube with a parallel passageway leading out of it. The corpse would be laid in, heading the east wards as they believed that all men migrated from the east. The family members of the deceased shave half of their heads as a symbol of mourning and prevention of being attacked by the dead.  The deceased’s immediate family members can be inherited by the brothers of the late and they believe also in reincarnation (Inkiya).

From the western shores to the northern plains, from the southern creeks to the eastern hills of Nigeria there is an ample rich cultural heritage that dates back to several generations. There is no doubt that the Eggon people of central Nigeria has this similar rich cultural values that cannot be extinct but will bask and extend to generations yet unborn.

Embrace Your Trauma For Healing – Artistes