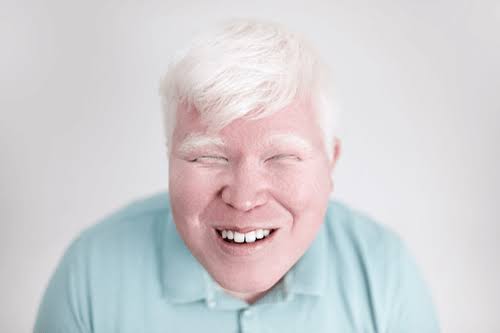 The word “albinism” May make you think of light skin or hair. But albinism also can affect a person’s eyes. When it does, it’s called ocular albinism, a rare eye condition that happens much more often in boys and men than in girls or women.

The eyes of someone with ocular albinism may look differ- ent and act differently, and the person might need to wear special glasses or contact lenses.

But that person won’t lose his eyesight completely, and it won’t get worse over time. In fact, as children who have it get older, their eyesight may get better.

People who have ocular albinism are born with it. In most cases, it happens because of a problem with a gene they inherit from their mothers.

Women carry this gene but don’t usually have symptoms. Almost everyone who has the most common type, called type 1 or Nettleship-Falls, is male. About 1 in 60,000 males have this.

The other type of ocular albinism is much less common. Both parents carry the gene for it, and both boys and girls can be born with it. Their skin and hair color also can be lighter than that of other members of the family. If both parents have this gene, there’s a 1 in 4 chance their child will have it.

The condition affects the retina and the nerves behind the eyes. The retina is a layer of tissue at the back of the eye that sends the brain sig- nals about what a person sees.

Things look blurry because the retina doesn’t develop the way it should. It can’t make a sharp image and the nerves behind the eyes can’t transmit a clear image to the brain.

Another symptom is the way the eyes look. Albinism keeps the body from making enough of a chemical called melanin, which gives eyes, skin, and hair their color.

Most people with ocular albinism have blue eyes. But the blood vessels inside can show through the colored part (the iris), and the eyes can look pink or red.

Quick eye movements that can’t be controlled. The eyes move quickly side to side, up and down, or in a circle. This is called nystagmus. In children, it usually gets better as a child gets older.

Sensitivity to bright lights or sunlight. The eyes are more sensitive to light because the iris doesn’t have enough color to protect the retina. Wearing sunglasses or tinted contact lenses can make being outside more comfortable.

People with ocular albinism usually don’t have the paler skin or hair seen in other kinds of albinism.

However, bifocal glasses, prescription reading glasses, and contact lenses can help with vision.

Some people also like using handheld magnifiers. And something as simple as having indoor lighting behind the shoulder instead of in front can help someone with ocular albinism see better.

Even though people who have this condition can be legally blind, they can still get a driver’s license in some states if they wear special glasses with small telescopes, called bioptic, mounted on them.

People with ocular albinism should be tested by an eye doctor and have exams at least once a year. The eye doctor can make sure the person has the right strength glasses or contact lenses to help him see better.

Children may have a hard time at school because they can’t see things on a blackboard or screen. Talk to your child’s school about large-print books, seating arrangements, and help in the classroom.

Your child’s eye doctor also may suggest: Glasses or mini-telescopes, Computerized dictation pro- grams and computer devices, such as video cameras, that can bring images closer.

The Growing Number Of Countries Using Bitcoin As A Reference Currency

Bitcoin And It’s Economic Importance In A Society